In Florida Este, Argentina on July 5,1975 a child named Hernan was born. A child that would later become  a legend and get called “Valdanito” after the legendary striker Jorge Valdano.

Crespo started his senior career with River Plate in season 1993-1994 and  scored 13 goals in 25 matches as the team won the Apertura leauge title. He also helped River Plate win the Copa Libertadores by scoring twice in the final in Buenos Aries. Hernan  totally  scored 24 goals in 62 matches in River Plate.

After his transfer to Parma on August 14,1996 he unfortunately couldn’t score for six months. During the time the spectators were mad at him and the coach Carlo Ancelotti for keeping Hernan in the team. It turned out that he was right for his choice; in his first Serie-A season, Crespo scored 12 times in 27 games and helped Parma finished coming after Juventus.

He scored 2 goals in the game against Cagliari in 1997 and got a standing applause, that was a historic moment though. The next season, Crespo scored the opening goal in UEFA Cup final match. It was the game that Parma won by 3-0 against Marseille and won 1998-1999 Coppa Italia.

The year Crespo became the most expensive player of the World; in 2000 Lazio paid  £35 million to transfer him. Scoring 26 goals, he finished Serie-A as the top scorer. Yet, in 2001 Lazio couldn’t defend the league title and the next season Crespo got injured, although he managed to score some goals. Lazio then had financial issues and had to sell some players.

Crespo signed with Inter Milan on August 31, 2002. He scored seven goals in three matches as well as the nine goals in twelve Champions League matches. He then got injured again and left out for 4 months in 2003.

On August 26, 2003 the Premier League club Chelsea transferred Crespo. He appeared in Blackburn Rovers match as a substitute on August 30, 2003 for the first time in the league. On September 16, 2003 he made his European debut in 2003-2004 Champions League group stage against Sparta Prague. Crespo scored 2 goals against Wolverhampton Wanderers and Chelsea won the game by 5-0.

He scored 12 goals in 31 appearances including 19 in the league.

After he scored twice, Crespo became the first player that scores with five teams. He totally scored ten goals in the league.

In 2005 season, since Chelsea needed a striker, the manager wanted to recall Crespo. He went back to Chelsea and made his appearance in FA Community Shield against Arsenal as Chelsea won the game. He scored the only goal as his first league goal against Wigan Athletic. The 2005-2006 League Title was his first league title in European football.

Crespo scored 13 goals and won the 2005-2006 Premier League, then wanted to go back to AC Milan but his request got rejected by Chelsea.

In 2008-2009 season Crespo could only make 13 appearances and got left out of Champions League squad. Inter signed him on a one-year contract after his contract at Chelsea expired.

Right after his contract expired at Inter, Genoa wanted to take him as a replacement for Diego Milito. Crespo wanted to get in the Argentina 2010 World Cup squad and that was the reason why he transferred to Genoa.

Crespo scored a goal against Napoli on September 13; it was his first goal of 2009 season.

On January 2010, Crespo went back to Parma.  He only scored one goal against Livorno in that season. The 2010-2011 season was a better year for him as he scored 11 goals. After this success Crespo became the top scorer of Parma for the 4th time.

Although people thought he would leave, Crespo extended his contract for one year on June 30, 2011. However, they had to terminate his contract on February 2, 2012 for some reason.

Since he scored 94 goals in 201 matches in total, Crespo was the all-time top scorer of the club.

Crespo as an Argentina Player

In 1995 King Fahd Cup, Crespo won the game against Bulgaria as Argentina finished runners-up. The tournament would later be recognized as FIFA Confederations Cup.

The next year, Crespo was in Argentina men’s football squad for the tournament; Olympic Games. He scored two goals in each quarter final against Spain and semi-final against Portugal. Doing so, he led Argentina to the final but they lost the game against Nigeria. Although, Crespo could score a goal from penalty in the match and that was his 6th goal of the tournament.

As Argentina senior team player, Crespo scored his 1st goal against Ecuador in 1998 World Cup qualifier. In pre-World cup he made a hat-trick against FR Yugoslavia. Crespo played in the final roster as a substitute and missed his kick against England, yet Argentina won the match by 4-3.

During the qualification for 2002 World Cup, he became Argentina’s top scorer with 9 goals. He unfortunately played as a substitute in three groups in finals. Crespo could score a goal in final match against Sweden but Argentina was eliminated from the tournament.

He scored 7 goals in 2006 World Cup qualifying, that includes the 2 goal he scored in the game against Brazil as Argentina won.

Crespo scored the 1st goal of Argentina-Ivory Coast match during 2006 World Cup. In 2nd group game he scored against Serbia and Montenegro; and in 2nd round match with Mexico too. Yet, Argentina got knocked out by Germany in quarter final.

During 2007 Copa America, Crespo scored a brace in the victory over the United States. In 2nd match, against Colombia he left Maradona behind scoring a goal from penalty. But sadly, Crespo got injured right after his kick and substituted. It was the last time he played in the national team.

Crespo finished his international career as Argentina’s 3rd highest goalscorer after the 35 goals he scored in 64 matches.

He ended his football career as a player in November 2012.  One more thing to tell; Crespo never got a red card during his career. 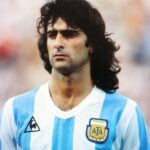