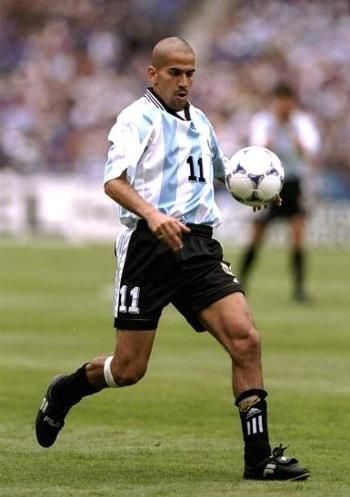 Sebastián Verón was born March 9, 1975 in La Plata, Argentina while his father Juan Ramon was starring in a match.

Sebastián Verón got the nickname “La Brujita” (The Little Witch) during his career after his father that was called “The Witch”.

He was a successful midfielder and got several awards.

Sebastián Verón started his excellent career with Estudiantes in 1993. There he helped the club play in Argentine Primera Division again.

Scoring 7 goals in two seasons in Estudiantes, he started playing for Boca Juniors in 1996. Veron scored 3 goals in 17 matches until 1996, the year he signed for Sampdoria. Veron stayed for two seasons in Sampdoria and scored 7 goals.

He then started playing for Parma on a £15 million contract in 1998.  His team won UEFA Cup and the Coppa Italia in the next year.

Sebastián Verón transferred to Lazio in 1999.  Playing for the 1st time in the 1-0 match against Manchester in European Super Cup, he kept showing great performance. The next year, he scored 8 goals and helped Lazio win Scudetto, Italian Super Cup and Coppa Italia.

Juan scored 11 goals for Lazio and moved to Manchester in 2001. As he signed for £28.1 million, he broke the English transfer record and became the 1st Non-UEFA player doing so.

Although Juan got the Premier League Player of the Month award in September; the next season didn’t go well for him. He scored 4 goals during Champions League and then got injured.

In 2003 Chelsea wanted to sign him for £15 million. Although he wanted to stay in Manchester, Chelsea managed to convince him.

Sebastian Veron’s start at Chelsea was good as he scored in the 2-1 match against Liverpool. But sadly, he got injured again during the 2003-2004 season and played in only 15 matches.

Sebastián Verón then got loaned to Estudiantes after he went back to Argentina in 2006. It was the club he loved and made donations to.

Estudiantes won the Apertura 2006, over Boca Juniors as Juan helped the club on December 13, 2006.

Sebastian Veron wanted to stay in Estudiantes for the next season. However, he suffered from injuries during the 2007-2008 season and couldn’t play in most of the matches.

Juan played in Brandsen during 2012 and scored 7 goals. He then returned to Estudiantes one year later.

Juan in the National Team

Sebastián Verón joined Argentina national team in 1996. He played in World Cup 1998 but Argentina lost in the quarter finals to Netherlands by 2-1.

On June 6, 2009, he played in FIFA World Cup 2010 qualifier against Colombia and got selected for the squad.

During the tournament, he made an assist against Nigeria in the 1st group match. Juan then couldn’t play against South Korea because he got injured. However, Juan was there when Argentina won 2-0 over Greece and he played for 90 minutes. Veron then missed the quarter final defeat.

Juan starred in Superclasico de las Americas 2011 although he retired on August 26, 2010. 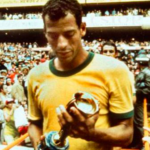 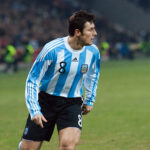