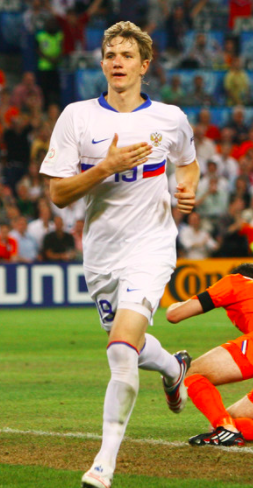 Roman Pavlyuchenko (Born 15 December 1981) is a Russian footballer who plays as a striker for FC Znamya Noginsk.

He started his career at Dynamo Stavropol, and Rotor Volgograd, before transferring to Spartak Moscow in 2003. His performances there earned him a £13.7 million transfer to Tottenham Hotspur of the English Premier League in 2008, where he spent three full seasons before returning to Russia to play for Lokomotiv Moscow. After another full 3 seasons he moved in July 2015, to Kuban Krasnodar.

A full international for a decade following his debut in 2003, Pavlyuchenko earned 51 caps for Russia, and scored 21 international goals. He was named in the Team of the Tournament at Euro 2008, with Russia reaching the semi-finals, and was also in their squad for Euro 2012.

During his time at Spartak, Pavlyuchenko was the club’s most prolific goalscorer, scoring 69 goals in 141 games. His goalscoring, together with his loyalty to the rhombik earned him much respect and appreciation from the “Army of Red-White Fans”.

In September 2008, Pavlyuchenko signed for Tottenham Hotspur for a fee of £13.7 million.

He has scored in every English domestic cup competition game he has played in, except for the 2009 Football League Cup Final. In the 2009–10 season, Pavlyuchenko was fourth-choice striker for Tottenham, with Harry Redknapp preferring Robbie Keane, Peter Crouch and Jermain Defoe to the Russian which Pavlyuchenko was linked a move away from the club. Pavlyuchenko has been linked with clubs like Lokomotiv Moscow, Zenit Saint Petersburg, Roma, A.C. Milan, Hertha BSC, Birmingham City, West Ham United and Spartak Moscow. However, Pavlyuchenko says that he cannot understand why the club didn’t let him leave the club, without any explanation.

The Russian’s Tottenham career up until this point had consisted of constantly being down the pecking order in the 2009–10 season despite having a better goals per minute ratio than all of his fellow strike partners in Jermain Defoe, Peter Crouch and Robbie Keane. The same went for the 2010–11 season when in March Pavlyuchenko had a minutes per goals ratio of 151 compared to competitors Jermain Defoe who had 208, Peter Crouch had 243 and Rafael van der Vaart had 161. In December of the 2011–12 season, the striker had been restricted to just 18 minutes of Premier League football, until he came on against Sunderland and went on to score the only goal of the game in the 61st minute. This was his third goal of the season having scored against Shamrock Rovers and Rubin Kazan in the Europa League earlier in the season.

Pavlyuchenko made his debut for the Russian national team on 20 August 2003.

Roman Pavlyuchenko was in the spotlight when he scored both goals in Russia’s 2–1 victory in a crucial Euro 2008 qualification match against England. He named in Guus Hiddink’s 23-man squad for UEFA Euro 2008. Scored in warm-up victories against Serbia and Lithuania.

Pavlyuchenko scored his first international hat-trick on 4 June 2011 in a European qualifier against Armenia in Saint Petersburg.

He confirmed for the finalized UEFA Euro 2012 squad on 25 May 2012. In their opening match against the Czech Republic on 8 June in Wroclaw, he came off the bench in the 73rd minute and set up his teammate Alan Dzagoev for Russia’s third goal. Minutes later he scored Russia’s fourth goal, and Russia went on to win 4–1.

On 24 July 2013, Pavlyuchenko announced his retirement from international duty.

UEFA Euro Team of the Tournament: 2008 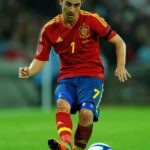 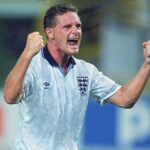