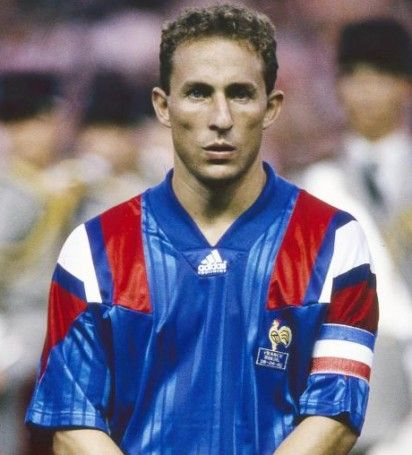 Jean-Pierre is a former footballer who played as a striker. He is popular for his striking ability, speed and volleys.

Such that, the fans started the call powerful volleys “Papinade” during his career.

After playing at INF Vichy, he started his senior career with Valenciennes in 1984.

The following season, he played at Club Bruges, netting 32 goals in 43 matches before he signed with Marseille in 1986.

Having him in the squad, Marseille became the league champions for 4 consecutive seasons from 1989 to 1992.

Papin led the team to the 1988-89 Coupe de France victory, being the leading goal scorer with 11 goals.

He became the league’s top scorer for 5 successive seasons between 1987 and 1991.

In the 1990-91 European Cup, Marseille reached the final against Red Star Belgrade, but lost the game in the penalties.

For his performance, Papin won the Ballon d’Or in 1991, being the only player to receive it while playing at a French club.

He netted 134 goals in 215 league games for Marseille and got transferred to Italian side A.C. Milan in 1992.

During his tenure, Papin couldn’t play because of injuries.

In the 1993 Champions League final, he played as a substitute where they lost to Marseille.

The next season, Jean-Pierre helped Milan win the tournament; yet, he didn’t star in the final.

Papin left to Germany to join Bayern in 1994.

In his 1st season, he again suffered from injuries and didn’t take part in many games. Yet, Papin was part of the squad that won the 1995-96 UEFA Cup over Bordeaux.

He only netted 3 goals in 27 matches with Bayern, and joined Bordeaux in 1996.

Papin’s helped Bordeaux reach the 1997 Coupe de la Ligue final in which they lost to Strasbourg.

He then signed with Guingamp, a Ligue 2 club, even though the English side Fulham wanted to transfer him.

Although Papin played for amateur clubs later, his professional career ended while playing at Guingamp.

His 1st cap came in a friendly against Northern Ireland in February 1986.

In the same year, Papin starred in the 1986 World Cup, scoring 2 goals and helping the squad finish 3rd.

Papin scored 9 goals during the Euro 1992 qualifiers and helped France join the competition.

Despite his effort, the national team couldn’t advance to the knockout stage.

Jean-Pierre played his last match in 1995 and ended his international career after scoring 30 goals in 54 games. 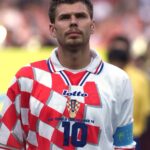