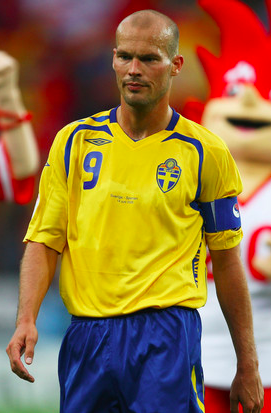 Fredrik Ljungberg (Born 16 April 1977 in Vittsjö, Sweden) is a Swedish former footballer who played as a winger. He currently coaches Arsenal’s Under-16s.He began his career at Halmstads BK and went on to spend most of his career at Arsenal, where he won honours including two Premier League titles and three FA Cups, scoring in two finals including the victory in 2002. After leaving Arsenal in 2007, he had short spells at a number of clubs in England, Scotland, the United States, Japan and India. An international for a full decade, Ljungberg earned 75 caps and was captain of the Swedish national team until he announced his international retirement after UEFA Euro 2008.

In 1989, at the age of 12, Ljungberg had convinced Halmstads BK to move him from p12 to p14 which was against Halmstad’s policies at the time. At age 14, Ljungberg joined the junior team under coach Robert Nordström. His perseverance paid off because three years later he was moved up to the senior team.

Fredrik Ljungberg made his senior debut on 23 October 1994 in the Allsvenskan against AIK. In 1995, Ljungberg played 31 games in which he scored his first goal as a professional player. That same year Halmstad won the Swedish Cup. In 1997, Halmstad won the Allsvenskan and Fredrik Ljungberg scored goals that year despite being injured. During his time with Halmstad, he went on to make 139 appearances and score 16 goals for the club. He won both the Swedish Cup and League title with the club. After two years with Halmstad, Ljungberg’s star was on the rise with interest from Barcelona, Chelsea, Aston Villa, Parma and Arsenal.

Fredrik Ljungberg was signed by Arsenal in 1998 for £3 million. Arsenal scouts watched him for over a year and Arsenal’s manager, Arsène Wenger, took the unusual step of authorising the signing after watching Ljungberg play for Sweden in their victory against England on television, without seeing him play live. Seeing Ljungberg’s performance against England only confirmed to Wenger that Ljungberg could cope against English opponents, and he was signed shortly after.

It was speculated in January 2007 that Ljungberg was being forced to leave Arsenal, after bosses became tired of a run of injuries restricting his play. “Ljungberg still has a lot to offer to Arsenal,” Arsène Wenger said, on 13 January 2007, at a Blackburn Rovers pre-match press conference, stressing the fact that Ljungberg will stay at Arsenal until the end of his contract in 2009.

On 23 July 2007, after nine years at Arsenal, Ljungberg joined London rivals West Ham United on a four-year contract. Ljungberg made his West Ham United debut on the opening day of the 2007/08 Premier League season, in West Ham’s 0–2 home defeat by Manchester City on 11 August, a game in which he was also captain. After seven months at the club, Ljungberg finally scored his first goal for West Ham in the home match against Birmingham City on 9 February 2008, putting West Ham up 1–0, with the game finishing 1–1. Ljungberg also scored away at Sunderland a month later in a 1–2 defeat, being his final goal for the club.

Ljungberg made his senior international debut on 24 January 1998 against the United States in Orlando, losing 0–1. He scored his first national team goal against Denmark in Malmö with a 3–0 victory.

During an open team practice before the 2002 World Cup, Ljungberg broke into a fight with teammate Olof Mellberg after a robust tackle from the latter. Ljungberg pushed Mellberg right in front of the world press and Mellberg responded by grabbing at Ljungberg’s jersey top at throat level before the two wrestled on the ground. The two of them were quickly separated by shocked team-mates and the team practice was immediately cancelled to deal with the public relations disaster. Within hours, video footage of the fight flooded the media and internet.

Sweden were one of the 16 teams to qualify for Euro 2004 with host nation of Portugal. In Sweden’s first game on 14 June, Ljungberg scored the opening goal as Sweden beat Bulgaria 5–0. He started the next two matches against Italy and Denmark, which both ended in draws. Sweden along with Italy and Denmark were in a three way tie for the first spot. However, it was concluded that Italy would not advance due to a goal difference after Sweden and Denmark drew 2–2. Italy disputed the decision saying both Sweden and Denmark fixed the match. UEFA squashed that notion and Sweden moved onto the next round to compete against the Netherlands. The match ended with 0–0 draw in which Ljungberg attempted two shots but failed to score.

Prior to the games, the team doctor prohibited Ljungberg from participating in full-blown training between matches to protect his injured foot. His right foot was swollen due to fluid building up inside his ankle joint. Ljungberg sat out the warm-up games against Finland and Chile at Sweden’s base in Bremen. Despite being advised to take time off, Ljungberg insisted on playing in the cup to help Sweden win.

After the World Cup 2006 finals, Ljungberg became captain of Sweden National Team. He captained the side in 8 of the 9 Euro 2008 qualifiers including games against Latvia, Liechtenstein, Spain, Northern Ireland, and Iceland. In the qualifiers, Ljungberg scored one goal against Liechtenstein on 17 October 2007 and had an assist in the Latvia match four days later. Sweden qualified for the European Championship with 6 wins.

MLS Player of the Month: October 2009 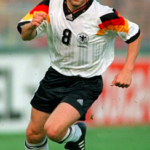 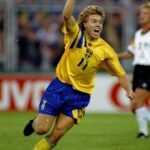