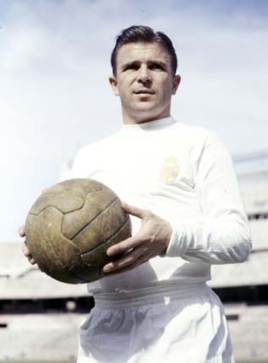 Ferenc Puskás Purczeld was born on April 1, 1927 in Budapest and grew up in Kispest and then later he changed his name to Puskás.

He was one of the greatest players of all time, with a goal-scoring ability which made him a successful forward.

Puskás started his career at Kispest AC as his father was coaching the team.

His debut for the club came in November 1943. By 1949, the team was taken over by the Hungarian Defense Military which changed its name to Budapest Honvéd.

Since players got military ranks due to what happened, Puskás at that time reached the rank Major. That was the reason for his nickname “The Galloping Major”.

In 1956, Budapest Honvéd participated in the European Cup and faced Atletico Bilbao in the 1st round. They lost 2-3 in the away leg and couldn’t play the home leg in Hungary due to the revolution occurred that time, they played it in Belgium. By Puskás scoring in, the game ended 3-3 and they got knocked out 6-5 on aggregate.

The team organized a World tour including Spain, Portugal and Brazil. After returning to Europe, the players took two ways; some returned to Hungary while others found a new challenge in Western Europe.

Puskás was one of the players that refused to go back to Hungary. He went to Spain, and starred in some unofficial games for RCD Espanyol.

At that time he was so close to sign for Juventus or AC Milan as both clubs showed interest in him. However, Puskás received a 2-year ban for not returning to Budapest, which didn’t allow him to play in Europe.

After the ban, his name was linked with many club names but in a few months, he joined Real Madrid.

Puskás scored a hat-trick in his 2nd game and finished his 1st season in La Liga with 4 hat-tricks. On January 4, 1959 Puskás and Di Stefano both scored hat-tricks in a 10-1 win over UD Las Palmas.

During 1960-61 season, Puskás scored 4 goals against Elche CF and 5 goals against the same team in the following season. He also managed to score two hat-tricks against FC Barcelona in one season.

Puskás scored at least 20 goals in the 1st six seasons in La Liga, winning Pichichi 4 times. He also helped Real Madrid win the La Liga title 5 times in a row between the years 1961-1965.

Scoring a brace in the 2-1 final game victory over Sevilla FC, he won the La Copa 1962.

During his tenure at Real Madrid, he won the European Cup 3 times, and the Intercontinental Cup once.

Puskás then finished his club career with 156 league goals in 180 games.

Ferenc Puskás helped Hungary become the Olympic Champions in 1952, after the 2-0 win against Yugoslavia.

In 1953, Hungary became the Central European Champions. They finished on the top of the table with Puskás being the top scorer by scoring 10 goals.

In 1954 FIFA World Cup, Puskás scored 3 goals in the two 1st round games. However, he suffered from an injury that didn’t let him play until the final. Although he appeared in the final with a hairline fracture in the ankle, Puskás managed to score against West Germany just after 6 minutes. But they lost the game 3-2 with a cancelled goal for Puskás before the game ends by 2 minutes.

Before he moved to Spain, Puskás played for the Mighty Magyars until 1956 and scored 84 goals in 85 games.

Puskás acquired the Spanish nationality in 1962, and appeared in 4 games for Spain.

The 3 of his total appearances were during the World Cup 1962, although he didn’t score in those games. 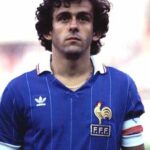 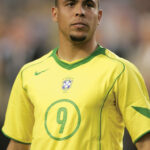