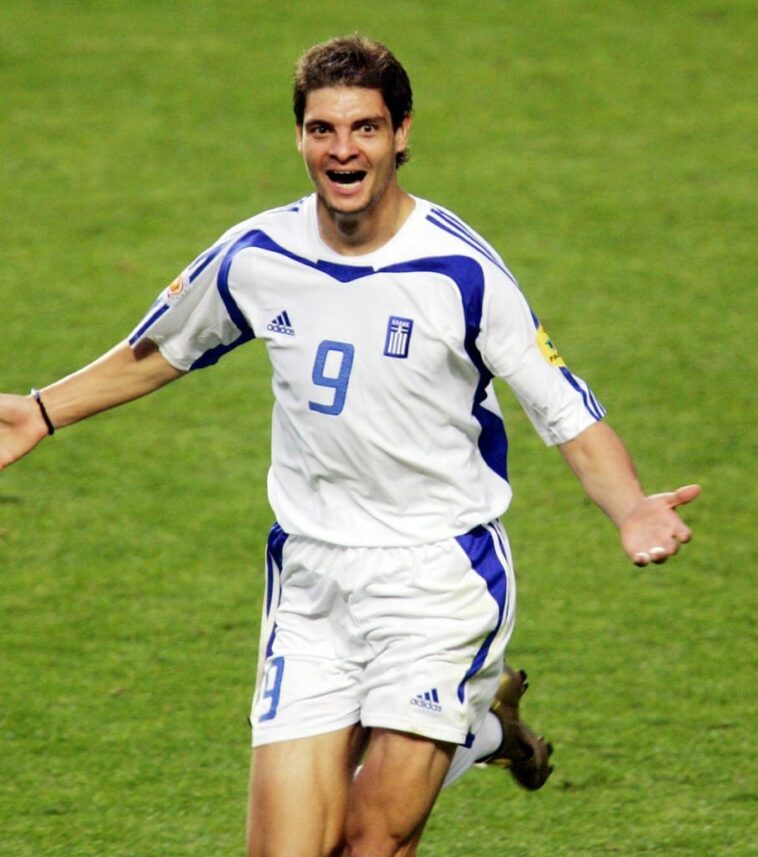 Angelos Charisteas (Born 9 February 1980) is a retired Greek footballer who played as a forward.

Internationally, Angelos Charisteas was capped 88 times by Greece, scoring 25 goals. He was a member of the UEFA Euro 2004 winning team, scoring three goals, including the winning goal in the final against Portugal. He also represented Greece in Euro 2008 and the 2010 World Cup.

After a few years playing for non-league Strimonikos Serron, Angelos Charisteas eventually started his professional career with Greek side Aris Thessaloniki. It was during his first season at Aris that Charisteas started making a name for himself. Scoring twice in nine matches as they won the Greek second division in 1997–98. Charisteas started well in his first season in the Greek top league and got further noticed when he scored twice in the local derby against Thessaloniki rivals PAOK. The striker made twelve appearances in the Alpha Ethniki – six as a substitute – before a loan at Athinaikos in 1998–99. He returned to Aris the following season and made his European debut in a UEFA Cup defeat by Celta de Vigo at the age of 19. Charisteas was continuously developing and in the 2000–01 season, where he scored seven goals.

Having been watched by scouts from a number of Europe’s leading sides, Angelos Charisteas was signed by German Bundesliga side Werder Bremen in the summer of 2002. He had a successful first season scoring nine goals in 31 appearances in the Bundesliga and two goals from four games in the UEFA Cup. Then in 2003–04, Werder Bremen won the Bundesliga and the German Cup with Charisteas scoring four goals from 24 appearances.

During the 2004–05 season, Angelos Charisteas scored five goals in 11 matches for Werder Bremen, before moving to the Netherlands to play for Ajax for a reported fee of €4.5 million. Greece manager Otto Rehhagel had publicly urged Charisteas to try to move to another club during the January 2005 transfer window. In order to get more first-team action. Ajax fitted the bill, as they were hoping to find a replacement for Swedish international striker Zlatan Ibrahimović.

Who had been sold to Juventus. Charisteas made his Ajax debut on 23 January 2005 against FC Utrecht and scored his first goal four days later against SC Heerenveen. However, he only managed three more games all season. Charisteas netted home eight goals in the 2005–06 season, which included a late winner against Vitesse Arnhem. Charisteas missed Greece’s crucial match in the World Cup qualifying due to a head injury received after colliding with Arsenal’s Kolo Touré in a Champions League match which Ajax lost 2–1.

Despite stating that he was only interested in a move to England or Germany, Angelos Charisteas signed for arch-rivals Feyenoord in Rotterdam on 31 August 2006, the final day of the summer transfer window. This move caused a great deal of agitation in Rotterdam with parts of The Legion, stating that they did not want an Ajax player at their club, protesting the move at De Kuip with the chant “Wij willen geen neus.” (translated as: “we don’t want a nose,” nose being derogatory slang for Ajax players) and demanded that chairman Jorien van den Herik resign.

Despite the protests, Charisteas made his debut for Feyenoord on 10 September against Sparta Rotterdam and played the full game. He eventually scored his first goal for his new club in his tenth game. Although he seemed to have convinced some fans at a certain point. Charisteas never enjoyed a good relationship with Feyenoord supporters. He finished the season having played a total of 28 games for Feyenoord, netting nine goals.

On 6 July 2007, 1. FC Nürnberg confirmed a deal with Feyenoord to sign Charisteas on a four-year deal worth €2.5 million. Charisteas scored his first two official team goals in a 6–0 victory against fourth division club SC Victoria Hamburg.

On 2 February 2009, he was loaned out to Bayer Leverkusen until the end of the season, helping the team to reach the final of the German Cup.

On 30 January 2011, Schalke 04 formalized his arrival. Charisteas signed a contract on 30 June 2011, until the end of the season. In his debut match for Schalke 04, he scored the second goal in a 2–1 home win against Eintracht Frankfurt. It was his first touch of the ball, having been on the pitch for only 52 seconds. On 13 April 2011, Charisteas reached the semi-finals of the 2010–11 UEFA Champions League with Schalke 04, beating in the quarter-finals the defending champion Internazionale, Charisteas replaced the Brazilian Edu in the 32nd minute of the second half. Schalke 04 and Charisteas reached a result never achieved before.

Having been a regular player for the Greek Under-21 side, Charisteas made his senior international debut in February 2001 in a 3–3 draw against Russia. His impact was immediate as he scored two of the goals for Greece that day. His prolific goal scoring continued, eventually helping his team qualify for the Euro 2004.

During the victorious Euro 2004 campaign, Charisteas scored three goals: one in the group stage against Spain, one against France in the quarterfinals and the winning goal against Portugal in the final. His contribution to the team and his impact in the competition was further recognised when he was named in the Euro 2004 All-star Team and he was also nominated for Ballon d’Or award, where he finished 11th in votes.

In the qualifying rounds for Euro 2008, Charisteas scored three goals, helping Greece to automatically qualify for the competition with two games left. He would go on to be one of the few Greek players who performed well at Euro 2008, scoring the defending champions’ only goal of the tournament in the 2–1 defeat to Spain. He also scored 4 goals for his country in the 2010 FIFA World Cup qualification.

Charisteas was called up again on 8 October 2011 for the qualification match against Croatia, and on 11 October 2011. Where he scored the winning goal in the 85th minute in Georgia, securing a 2–1 victory which sent Greece automatically to the Euro 2012 Championships. With this goal, Charisteas score in three qualifiers for European Championships and for three consecutive World Cups. Became the only player to reach that in the Greek national team. Charisteas also became the second top scorer for the Greece national team with 25 goals. Four less than the retired Nikos Anastopoulos. 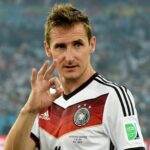