Andoni Zubizarreta was born on October 23, 1961 in Vitoria, Spain. He started his professional goalkeeping career in 1979. For many years, he became the most played player of the Spanish national team. While playing in Athletic Bilbao and Barcelona, ​​he achieved many successes both individually and with the club, for instance he played with the Spanish national team in four FIFA world cups and three European championships.

Andoni Zubizarreta started his career in Alaves B in 1979. The next season, he rose to the team and the La Liga adventure began. However, he did not play in that season. He was transferred to Athletic Bilbao in 1981. He played here from 1981 to 1986. Zubi played 169 games in Athletic Bilbao. Andoni Zubizarreta became permanent in the team after a game he played by chance. He became champion in Athletic Bilbao in the 1982-83 and 1983-84 seasons. Secondly he also won the Spanish Cup in the 1983-84 season and Supercopa de España in 1984. In 1986 he transferred to Barcelona for 1.7 million euros. During his time in Barcelona, ​​he achieved many successes. Most importantly Zubi has been the La Liga champion in Barcelona 4 times in a row from 1990 to 1994. 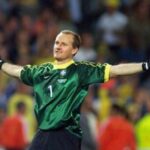 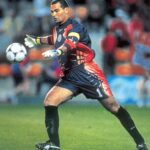