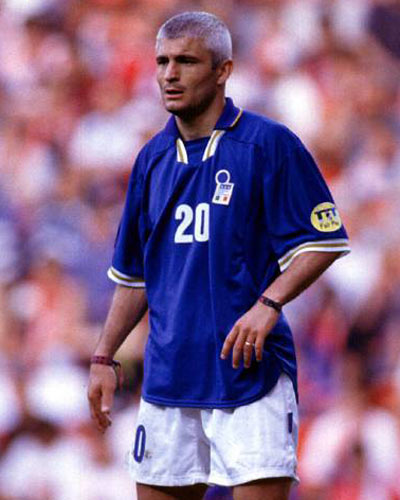 A former striker, Ravanelli started and ended his playing career at hometown club Perugia Calcio, and also played for Middlesbrough, Juventus and Marseille. He won five titles with Juventus, including a Serie A championship in 1995 and a Champions League title in 1996 where he scored in the final. In all, during his career he played with twelve clubs from four countries; his native Italy, England, France and Scotland. Nicknamed ‘The White Feather’, he earned 22 caps for the Italian national team, scoring 8 goals, and was a member of the Italian squad that took part at UEFA Euro 1996.

Ravanelli began his club career with his hometown club Perugia Calcio in 1986, where he remained until 1989. He had a spell with Avellino later that year, and subsequently played with Casertana for a season. In 1990, he moved to Reggiana, where he remained for two seasons.

After joining Juventus in 1992, he formed a formidable offensive line alongside players such as Roberto Baggio, Gianluca Vialli, Paolo Di Canio, Pierluigi Casiraghi, Andreas Möller, and Alessandro Del Piero. Affectionately known as the “White Feather” (in Italian: Penna Bianca) in recognition of his prematurely white hair (a nickname which had also previously belonged to former Juventus legend Roberto Bettega), he was one of Europe’s top goalscorers in the mid-1990s. After initially struggling to obtain a starting spot under Giovanni Trapattoni, due to competition from several other strikers, he eventually managed to break into the starting line-up. During the 1994–95 season, under Marcello Lippi, he played a key role as the club claimed a domestic double, playing in an attacking trident, alongside Vialli, and either Baggio or Del Piero.

Fabrizio Ravanelli made an immediate positive impact on moving to the Premier League with Bryan Robson‘s Middlesbrough on a £7 million transfer in 1996, where his success was sustained. He scored a hat-trick on his league debut against Liverpool on the opening day of the 1996–97 season. Despite being one of the league’s top scorers, Middlesbrough were relegated in the year that he joined. He did, however, help them to the final of both domestic cup competitions that season.

He started both finals, as Middlesbrough lost 2–0 against Chelsea in the FA Cup Final, and Leicester City 1–0 in the replay of the League Cup Final. Ravanelli scored the first goal in the final of the first meeting, only for Emile Heskey to equalise and send the game to a replay, which Leicester subsequently won. He alienated himself from teammates and fans, with his constant complaints and criticisms of the club’s training regime and facilities, as well as the town itself, despite being the highest paid footballer in the Premiership at the time. Whilst at the club, he resided in the local small North Yorkshire village of Hutton Rudby, where Middlesbrough football associates, such as Paul Merson, Gordon McQueen and several other notable individuals have had residences.

After Middlesbrough’s relegation, Ravanelli moved to Olympique de Marseille. In the 1998–99 season, Marseille finished in second place in the French Division 1, one point behind Girondins de Bordeaux. The following season l’OM competed in the 1999–2000 UEFA Champions League, with Ravanelli scoring once against Sturm Graz at the Stade Vélodrome.

In January 2000, Fabrizio Ravanelli returned to Italy to sign for Lazio. Ravanelli won his second Scudetto as Lazio ended the 1999–2000 season as champions, also winning the Coppa Italia, and the Supercoppa Italiana.

In July 2001, Ravanelli joined Derby County on a free transfer, signing a two-year deal, but could not save the club from relegation in 2002. Due to Derby’s financial problems, they had to defer his wage payments which they paid for several years.

He then joined Dundee, following the end of his Derby contract, but was sacked after the club released all of their top earners. The only game in which Ravanelli scored for Dundee was against Clyde in a League Cup match, when he scored a hat-trick.

After the experience in Scotland, he returned to Italy to finish his career with his hometown club Perugia, with whom he had also started his professional career, with the aim of trying to save the club from relegation.

Fabrizio Ravanelli earned 22 caps for the Italian national team between 1995 and 1999, under managers Arrigo Sacchi, Cesare Maldini, and Dino Zoff, scoring eight goals. He made his international debut under Sacchi on 25 March 1995, in a 4–1 home victory over Estonia, in an UEFA Euro 1996 qualifying fixture in Salerno, also scoring his first international goal during the match. Ravanelli was a member of the Italian squad that took part at UEFA Euro 1996, and made two appearances throughout the tournament, which came in Italy’s opening two group matches, a 2–1 win over Russia, and a 2–1 loss against the Czech Republic, as Italy were eliminated in the first round. He missed out on a spot at the 1998 FIFA World Cup, however, as striker Enrico Chiesa was selected by Maldini in his place. 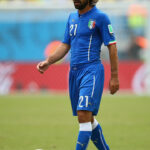 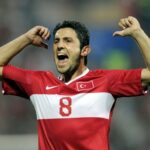