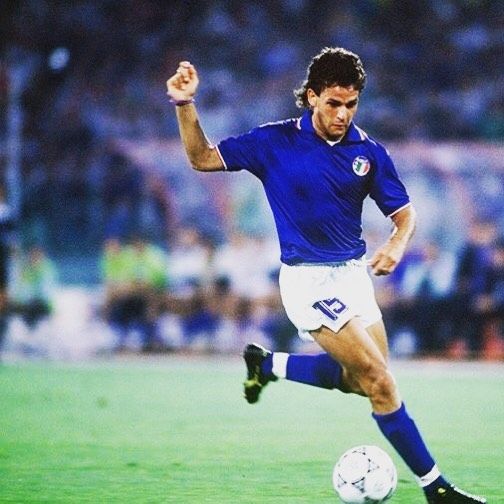 Roberto Baggio was a technically gifted and creative forward who won several awards for becoming the top scorer. Michel Platini would describe him as “9 and a half” since Baggio could be also a midfielder.

After playing at Caldogno youth squad, he moved to Vicenza youth team in 1980. Vicenza was the club where he started his professional career 2 years later.

On May 5, 1985, Roberto Baggio got injured in his right knee and ACL which threatened his career. However, Fiorentina was still interested in him and funded his surgery, and then transferred him to their lines for 1.5 Million Euros.

In short time after getting recovered, he became so popular and loved by fans. He was even regarded as one of the best players ever in the club.

Baggio made his debut for Serie A on September 21, 1986. However, he got injured on September 28 again, which made him miss most of the season.

After his recovery, Baggio scored his 1st goal in Serie A on May 10,1987 against Napoli from a free kick. That goal saved Fiorentina from relegation.

Baggio managed to score 9 goals in the 1988-89 Coppa Italia, taking Fiorentina to the quarter-finals before Sampdoria eliminate them. In the same season he came 3rd in the top scorer title of Serie-A with 15 goals in the league. Doing so, he helped Fiorentina finish 7th in Serie-A and secure a UEFA Cup spot.

Roberto Baggio earned the nickname “B2” after his phenomenal attacking partnership in that season with Stefano Borgonovo. They scored 29 goals of the 44 goals of Fiorentina in Serie-A in that season.

During 1989-90 season, although Fiorentina was struggling with relegation, Baggio led the team to the 1990 UEFA Cup final.

Baggio scored 17 goals to come 2nd-highest goal scorer in the Serie-A in the same season. He earned the Bravo Award as the best under-23 Player in European Competitions.

In the 1st season with Juventus, he managed to score 14 goals and make 12 assists in Serie-A. Juventus reached the semi-finals of the European Cup Winners’ Cup of the year. But unfortunately, they got eliminated by Johan Cruyff’s Barcelona.

Roberto Baggio was the top scorer of the tournament with 9 goals, wearing the number 10 shirt. Juventus also didn’t make it to the semi-finals of Coppa Italia after winners Roma eliminated them in quarter finals.

Another 2nd place finish came in the 1991-92 Coppa Italia, as they lost the final match to Parma.

In season 1992-93, which was one of his best seasons, Baggio became the team’s captain. Baggio won his 1st and only European club trophy, scoring twice and making one assist in the UEFA Cup final.

Juventus reached the Coppa Italia semi-finals, but lost to Torino and finished 4th in Serie-A in that season. Baggio, again, came 2nd for the Serie-A top scorer title with 21 goals and 6 assists.

In 1994-95 season, Roberto Baggio suffered from injury for most of the season. He returned in the 1st leg of Coppa Italia semi-final game against Lazio on March 8, 1995. Baggio only managed to play 17 Serie-A games due to the injury. He still managed to score 8 goals and provide 8 assists which helped him win his 1st Scudetto with Juventus.

He scored 4 goals in UEFA Cup leading the team to another final in which the team lost to Parma. Baggio scored 78 Serie-A goals in 141 games.

He got named one of the 50 greatest legends of Juventus in 2010.

In 1995, Roberto Baggio joined A.C. Milan for 6.8 million Euros, after facing problems with the Juventus manager. Even though Baggio struggled with injury at the beginning, he managed to come back fast. He scored 7 goals including a penalty in the title-deciding match to help Milan win the Serie-A title. He became the top assist provider with 12 assists in the season.

He also managed to be one of only 6 players to win the Scudetto with two different clubs consecutively.

In the next season, Roberto Baggio had problems since he had limited playing time, being often substituted in the 2nd half. As a result, Milan couldn’t keep the league title dropping to 11th place, also got eliminated the Coppa Italia quarter-finals.

Baggio scored 19 goals in 67 games with A.C. Milan in all competitions.

In 1997, Roberto Baggio was transferred to Bologna. His goal was to save the team from relegation. He had a successful season, scoring 22 goals in Serie-A, and assisting another 9 to be his personal best in Serie-A.

Thanks to Baggio, Bologna managed to reach the 8th place which allowed them to qualify for the UEFA Intertoto Cup. Baggio was also top scoring Italian and the third goal scorer in Serie-A. He also led Bologna to the round of 16 in the Coppa Italia.

He signed with Inter Milan, his favorite childhood club, after the World Cup 1998. However, Baggio faced problems in playing time again.

In 1998-99 season he scored 5 goals and assisted 10 in 23 games as Inter finished the league as 8th on the table. He helped them to reach Coppa Italia semi-finals which they lost to Parma.

He also scored 4 goals in Champions League to reach the quarter finals but they got eliminated by Manchester United.

In 1999-2000 season, the new coach Lippi didn’t give Baggio any chance to play for the most of the season. He only scored 4 goals in 18 matches in the Serie-A.

Baggio helped his team reach the 1999-2000 Coppa Italia final in which they got defeated by Lazio. In the competition, Baggio scored 2 goals against Parma in a 3-1 won.

Those goals which led Inter to Champions League place were his last important contribution to the team.

Baggio decided not to renew his contract due to the problems between him and Lippi so he went to Brescia as a free agent.

He scored 10 goals and provided 10 assists in the 2000-01 season as Brescia finished 7th in the table. It was the best Serie-A finish ever for the team. Baggio also helped them reach the 2001 UEFA Intertoto Cup final, but they got knocked out by PSG.

In 2001-02 season he faced a lot of injures that kept him away most of the season. However, he managed to save Brescia from relegation on the final match day.

In 2002-03 Season, Baggio helped Brescia to finish 8th in the league table to get another UEFA Intertoto Cup spot.

Roberto Baggio scored 12 goals and provided 9 assists during the season including his 300th career goal on December 15, 2002.

Ending his career with 205 Serie-A goals made Baggio the 7th highest goal scorer of all time.

He played in his 1st international senior game against Netherlands on November 16, 1988. His 1st goal for Azzurri came on April 22, 1989 from a free kick.

Baggio played in his 1st World Cup tournament in 1990. He scored twice in 5 games including the “Goal of the Tournament” in a 2-0 win in his first game. That goal is now recognized as the 7th best goal in World Cup history.

Although he played mostly as a substitute, Baggio helped Italy reach the semi-finals which they eventually lost.

Baggio then participated in the Euro 1992 qualification, scored twice in his 3 appearances as Italy couldn’t join the tournament.

In the World Cup 1994 qualifications, he became the top scorer of the team with 5 goals out of 14 along with 7 assists.

During the competition, Roberto Baggio led Azzurri to the final with 3 winnings in the knockout rounds with 5 memorable goals.

He scored twice in the round of 16 to defeat Nigeria 2-1 with a ten-man team. He scored again the winning goal in the quarter finals against Spain 3 minutes before the match ended

He was the “man of the match” in the semi-finals with 2 goals as Italy won the game against Bulgaria 2-1. However, Baggio was struggling with health problems in the final match which ended 0-0 after extra time. He missed the last penalty that made them lose the title and Brazil won the competition.

He asked for the manager’s dismissal after the 2-1 defeat to Croatia during the Euro 1996 qualifications. Following that, he didn’t participate in the tournament which Azzurri got eliminated in the group stage.

He returned to the national team to join the Italy’s World Cup 1998 qualification squad.

He scored the equalizer in the opening match against Chile. Doing so, Baggio became the 1st Italian player in the history to score in 3 World Cups.

In Italy’s final group match he scored the winning goal against Austria. It was his 27th and final goal for Italy. He tied with it the record for the most goals scored by Italian player in the world cup finals.

Italy got knocked out by France later in the quarter finals in the penalties. 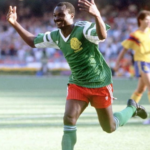