Emilio Butragueño was a gifted striker who became popular for his Real Madrid spell.
He was born on July 22, 1963 in Spain and joined Real Madrid youth squad at the age of 18.

Emilio Butragueño made his senior debut for Real Madrid on February 5, 1984 against Cádiz CF. He scored 2 goals and assisted the 3rd one in the 3-2 victory.

In the same year on December 12, Emilio made his European competition debut. He scored a hat-trick in a 6-1 win against Anderlecht as they won the 1984-85 UEFA Cup.

El Buitre helped Real Madrid become a legend during his tenure and won many competitions and awards with the club. He was a key player as he won the European Bronze award in 2 successive years and the Pichichi once.

By the end of 1994-95 season, Emilio had lost his place in the team already. He just played 8 games and scored once during the season, although Real Madrid won the league trophy.

Emilio signed for the Mexican side Atlético Celaya in June 1995 and led the club to the Liga MX final.

The Gentleman of the Pitch

He was a player of Celaya for 3 seasons, having 91 appearances until he got retired in 1998. Emilio got a new nickname at Celaya; “The Gentleman of the Pitch”, since he never received a red card.

Emilio Butragueño made his debut for Spain on October 17, 1984 in the World Cup 1986 qualifier against Wales. However, he had played as an uncapped player in the UEFA Euro 1984 squad which finished runners-up to France.

Butragueño helped the Spain National Team for the World Cup 1986. He scored 4 goals in the 5-1 win over Denmark in the round of 16 and won the Silver Boot.

Emilio Butragueño joined the World Cup 1990 but played 4 games without scoring, as Spain lost in the round of 16. 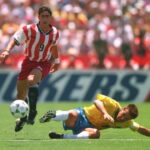