Gary Lineker is a former English footballer who played as a striker.

He is famous for his fair play, as he never received a red or yellow card in his career.

Born on November 30, 1960, in Leicester, Gary started his football career after he left school in 1976, at Leicester City.

He later made his senior debut at the same club in 1979, where they beat Oldham Athletic by 2-0.

In the next season, Gary became the Second Division top scorer with 26 goals, so the club got promoted to the First Division.

Leicester finished 15th in the league table, although Lineker became the 2nd highest goal-scorer of the 1983-84 First Division.

Despite finishing the 1984-85 season in the 15th place again; Gary became the top scorer with 24 goals.

His talent drew the attentions of the bigger clubs, and Everton was one of them.

Everton joined the 1985 FA Charity Shield as the 1984-85 league winners. They defeated Manchester United by 2-0 and won the title.

In the 1986 FA Cup final, Gary scored the only goal of his side, as Liverpool became the champions by 3-1.

Gary Lineker led the club to their 2nd-place finish in the First Division, being the top scorer with 30 league goals.

During his successful spell at Everton, Lineker got named the PFA Players’ Player of the Year, and the FWA Footballer of the Year.

Barcelona was the team where he joined a European competition for the first time.

Making his debut against Racing de Santander and scoring a brace; he scored 21 goals in his 1st season. Gary recorded a hat-trick in this season, in the 3-2 victory over Real Madrid.

Lineker departed from the club in 1989, after scoring 42 goals in 103 La Liga matches. He was the leading British goalscorer in the tournament history.

Although Manchester United intended to transfer Gary, he signed with Tottenham Hotspur in July 1989.

In his 1st season, Lineker became the top scorer with 25 goals as Hotspur finished 3rd in the league.

Gary joined the 1990-91 FA Cup, as they won the trophy defeating Nottingham Forest 2-1 in the final. He recorded a brace in the 3-1 semi-final victory over Arsenal.

In the 1991 FA Charity Shield, Hotspur faced Arsenal as the game was a 0-0 draw, and shared the victory.

Lineker became the 2nd highest goal-scorer of the 1991-92 First Division, with 28 goals in 35 matches. Despite his effort, Hotspur finished 15th in the league.

Lineker got named the FWA Footballer of the Year for the 1991-92 season, as he netted 35 goals.

Gary Lineker scored his last goal for Hotspur in a 3-1 loss to Manchester United and accepted an offer from Nagoya Grampus.

He started his Japanese football career after signing a 2-year contract with the J1 League club.

In September 1994, Gary announced his retirement after scoring 9 goals in 23 games for Nagoya Grampus Eight.

Gary Lineker played for the England B National Team once in a 2-0 victory over New Zealand B team, on November 13, 1984.

His 1st England National Team match came in the same year, against Scotland.

In 1986, Lineker starred in his 1st World Cup, which he received the Golden Boot award, being the top scorer with 6 goals.

Despite that England eliminated in the quarter-finals, Gary got named in the FIFA All-Star Team as a forward.

After the Euro 88 disappointment, in which they got eliminated in the group stage, Gary joined the 1990 World Cup.

During the tournament, Gary contributed to their 4th-place finish, scoring 4 goals.

He scored their equalizer in the semi-final against West Germany. Yet, he couldn’t save the team from losing 4-3 in the penalty shootouts.

It wasn’t until Gary substituted in the Euro 92 game against Sweden; he played in his last match for England.

After the tournament, Gary announced his retirement from international football with 48 goals and 80 caps. 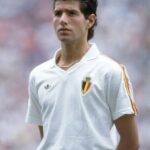 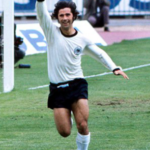